Nokia’s Downfall at a Glance

How Connecting “to” People did not work for Nokia

As they assert, “Whatever goes up, must come down”.

The same happened to our favourite, Nokia!

The Finnish company which started off as a Paper Mill in 1865, decided to concentrate on the telecommunications market in the 1990’s and within the next few years redefined the whole mobile industry. In 1991, the first ever GSM call was made using the Nokia equipment.The following years witnessed some amazing developments such as storing contacts, sending mails and fax etc. In 1998, with the launch of Nokia’s 6100 series and selling over 41 million phones, it became the world’s top mobile phone maker of that year! (not to forget it was the first phone which came with the classic snake game pre installed.)

The 21st century ushered a completely new era – the 3rd generation of wireless technology was released and Nokia wasted no time. It launched its first 3G phone in 2002 together with the Symbian 60 OS. In 2003, the corporation launched the Nokia 1100, which sold around 250 million units, making it the best selling consumer electronics product within the world.

By 2007, Nokia managed to capture 50% of the market share, and that’s when the downfall began.

With the rise of Google’s Android version 1.0, the newcomers like Samsung and HTC were fast to react with the changing market. That year, Nokia’s Q3 profits nosedived by 30%. On the other hand, iPhone brought a new sense of what a smartphone could do and its sales sky-rocketed by around 330% during the period. In the year 2013, the Company was now operating at under less than 5% market share and was on the losing side majorly against Samsung and Apple.

The desperate attempt for a comeback

Nokia was desperate for a comeback and announced a partnership with Microsoft in 2010. This partnership resulted in the manufacturing of the Lumia 800 and Lumia 710 smartphones. While the former aimed at the niche market, the latter focused at the lower-end consumers.

Though the sales were decent, the new Windows Phone devices couldn’t do much for Nokia and  the company suffered an operating loss of €1.3 billion in that quarter. Finally, the year 2013 brought some good news as Nokia returned to profit six quarters of bleeding money. However, revenue continued dropping owing to the company’s failure to make any dent in the smartphone market.

Despite being valued at around $50 billion, Nokia was finally sold to Microsoft in 2013 for $7 billion. Given Window’s specialization in software and Nokia’s great hardware, it was expected that something more genuine and innovative could be constructed but even Microsoft couldn’t handle the mobile industry. When the CEO of Microsoft, Satya Nadella, was hired, the foremost thing he did was that he separated Nokia from Microsoft and signed an agreement with HMD Global which makes it the only global licensee for all kinds of Nokia-branded mobile phones and tablets. However, it’s no longer the brand that enjoyed the glory.

The company has been on such a steady and gentle downward slide that it is easy to forget how dominant and long-lasting its reign was over the cellphone business. The corporate took way too long to embrace the smartphone revolution and when it finally did it made way too many errors in its strategies. 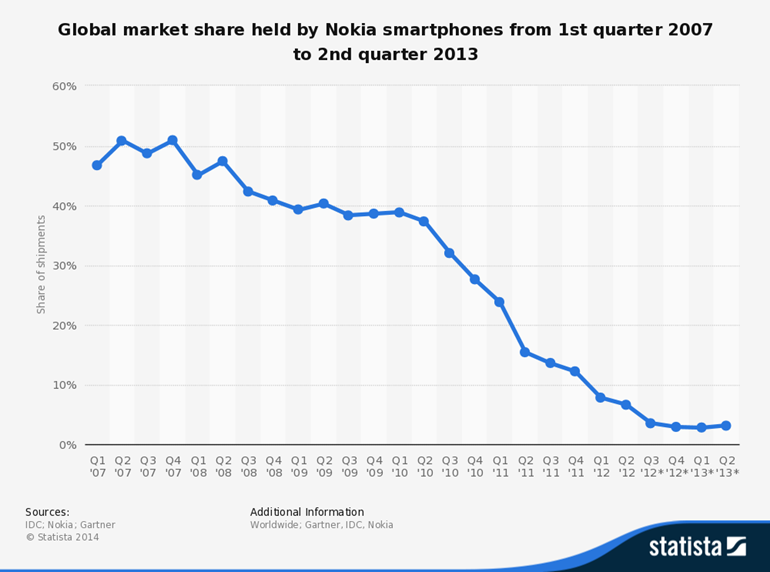 Both Apple and Samsung got hold of the wonderful game plan, which Nokia couldn’t manage to understand. Even when the market of smartphones has actually become saturated, the release of a newer version of an Apple or Samsung device still gets everyone excited. But this has not been the case with Nokia. Nokia never tried to alter the prevailing image of the brand to the newer image by highlighting the new features or the novelty that the corporate has. The Finnish company’s unwillingness to embrace drastic change when it was required the most was probably the biggest reason that brought the mobile giant down. The sudden shift of the organization to a matrix structure and internal rivalries within the company further fueled the failure.

Now, that you know, it wouldn’t be tough to answer the question, “Who killed Nokia?” Yes, you are right. Nokia did!

Previous articleKingfisher Airlines: The Indian Escape
Next articleBlackberry: From 50% to almost 0

Subscribe to get the latest news, offers and special announcements.